Recreating a silent and still moment of imagined rain drops frozen in time, Alyson Shotz continues her theme of nature found in her larger bodies of work. This piece also shows how a viewer's perception changes over time due to cultural constructs. From the early fears of nature to the desire to control it through science and technology, Shotz questions how people interact with their natural environment and how they see themselves as being part of or separate from it. Shotz received her BFA from the Rhode Island School of Design and her MFA from the University of Washington. She has won grants from the Pollock-Krasner Foundation and Arts Matters Foundation, and the Center Contemporary Art, Northwest Annual Award. Considered a visual and concept artist, Shotz creates pieces that privilege the material and acknowledge the formal and visual aspects of art making while articulating a specific concept or idea. She sees art as a process of discovering and intelligence gathering, where the journey is just as important as the product. 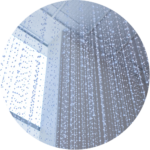 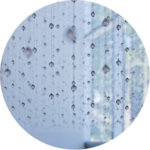