Read an essay about this artwork featured in the book On Site: 50 Years of Public Art of the University of Houston System.


“Euphonia” is by far the largest and most significant artworks in the collection of Public Art of the University of Houston System and one of the largest Frank Stella artworks in the world. This three-part painting took a team of local artists months to complete and spans over 5000 square feet. The kaleidoscopic pattern and vibrant palette of this installation was created using early computer software to digitize and pixelate images of foreign currency, abstract patterns and cigar smoke. Under the direction of Stella, the imagery was then meticulously applied by artists utilizing a variety of methods including tape-painting, collage, projection, and stenciling. Stella majored in history at Princeton University. His visits to New York art galleries influenced his artistic development, and in 1958 after his graduation he moved to New York. Before turning twenty-five Stella’s work was recognized for its innovations. Throughout his career he exhibited at many prestigious galleries and museums. Some of which even helped define the world of art in the 1960s. Now his work is held in collection and shown across the world. 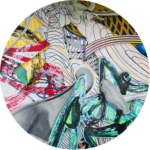 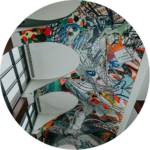 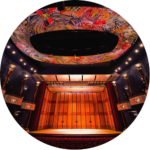 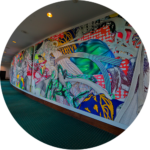