James Surls has lived and worked most of his life in Texas including 20 years in Splendora. His work ranges from delicate drawings, to monumental works in steel and bronze. This piece is indicative of his style of the time blending modernism and folk-art styles featuring the artist’s favorite theme, the flower. Surls grew up on a farm in East Texas, where he learned to use the tools his art requires, such as axes, chisels, and chainsaws. He also learned to work with natural materials, like his favorite medium, wood. Surls started his art path in college when he started taking art classes because they were the first ones on the class list schedule. In 1966 he graduated from Sam Houston State University with a bachelor’s in science and went on to get his MFA from Cranbrook Academy of Art. Surls’ early work was often geometric and consisted of a pyramidal “A” shape with protruding pegs. Later he explored the inherent organic structure of wood and allowed the natural grains and curves dictate his pieces such as in “Flower Woman”. Surls wants his works to exist on multiple levels, complex, challenging, and intriguing to the viewer. Often drawn from personal experience, his subjects allow his sculptures to transcend any single personal or regional representation and give way to a more universal sense of mystery and fantasy. From receiving the Living Legend Award from the Dallas Visual Art Center in 1993 to holding exhibits in the Guggenheim and Whitney Museum of American Art, Surls is indeed a renowned artist. For starting his path with art by chance, he has developed a style that makes his work stand out amongst the rest. 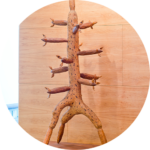 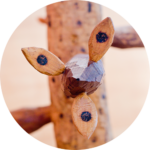