As one of the most accomplished American painters working today, Gael Stack is determined to have her art reflect her reality. As a single working mother, raising two sons, Stack is more cognizant than others of the issues raised by feminism and it shows in the pieces she creates. When she first came to Houston, Stack worked three part-time jobs, teaching at the High School for Performing and Visual Arts, at the Contemporary Arts Museum, and at the University of Houston. She is now a full-time professor at the University of Houston School of Art and has been there for forty years. She is interested in exploring “language and its limits,” depicting moments in daily life through her art. Fragments of words and images create a visual language in her pieces. Since 1972 Stack’s work has been part of national and international exhibitions including shows at the Guggenheim Museum. In 2004-2005 she served as the Director of the UH School of Art. Stack received her BFA from the University of Illinois and her MFA from Southern Illinois University. 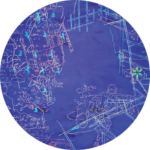