UH’s Connection to the Bauhaus 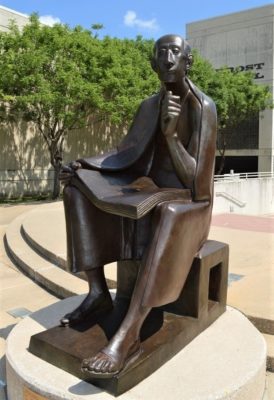 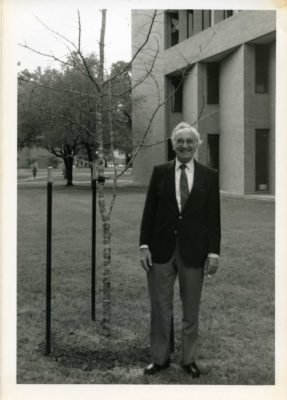 On Gerhard Marcks, Peter Guenther and the Bauhaus

This year marks the 100th anniversary of the founding of the Bauhaus (or “building house”), the influential German school that pioneered an integrated approach to art, design and eventually also architecture. Established in 1919 in Weimar by architect Walter Gropius (1883-1969), the school relocated to Dessau and later to Berlin where it was sadly forced to close in 1933 following mounting pressure from the Nazi regime. Having been pinned as a hotbed of communism, many of the Bauhaus’ resident artists and intellectuals fled Germany spreading the school’s theories and teachings and expanding the reach of Modernism throughout the world.

Public Art UHS and the Bauhaus have important connections through the late Peter Guenther, founding chair of the Art History Department at University of Houston. His father Alfred Günther was a well-known German poet and journalist who was in the orbit of many faculty members at Bauhaus including Paul Klee who was Guenther’s godfather. An art historian by training, Peter Guenther and his family left Germany after the war and eventually settled in Houston.

Guenther, who taught at UH for 30 years until his retirement in 1994, helped to establish the first Art Acquisition Committee for Public Art UHS in 1969. In that capacity, Guenther recommended the purchase of UH’s first outdoor sculpture, Albertus Magnus (1955, cast in 1970) by the Berlin-born artist Gerhard Marcks (1889-1981). “Big Al,” as the piece is affectionately known on campus, was installed in 1971 in front of the Bates School of Law and sparked an interest in acquiring other larger outdoor works.

A friend of the Guenther family, Marcks was one of Gropius’ longtime colleagues. In 1919 Marcks joined him at the Bauhaus, becoming one of the first three faculty members hired by the school. He held the position of artistic director (master of form) of the Bauhaus’ Pottery Workshop until 1925, when the school moved to Dessau and discontinued its ceramics program. Marcks went on to hold several important teaching positions across Germany. There is a museum in Bremen named after him, the Gerhard Marcks Haus.

[Read more about Marcks at the Bauhaus here: https://www.bauhaus100.com/the-bauhaus/people/masters-and-teachers/gerhard-marcks/]

L-Peter Guenther stands next to one of 5 Oak trees planted to honor him and his family. R-Albertus Magnus by Gerhard Marcks.