February – Public Art Tour at the University of Houston-Downtown


Free and open to the public, Public Art of the University of Houston System hosts regular tours every first Friday, from October through May, hosted by university professors, artists, curators, critics and students. Tours offer the community an opportunity to learn more about art, creativity and artistic movements. Each tour highlights different artists and works to explore the gamut of human expression. Tour walks begin with a brief welcome and introduction of the day’s theme. Routes and starting points vary with each tour. Participants are encouraged to bring water, dress appropriately for the weather, wear comfortable shoes, and to bring a friend.

Established in 1974 and located near Allen’s Landing, the birthplace of Houston, University of Houston-Downtown is home to a public art collection that highlights diversity, documents Houston’s history, artistic talent and underscores a rich and diverse academic student experience. Featuring over 60 artworks by such notable artists as John Biggers, Floyd Newsum, Jacob Hashimoto, Nancy Graves, Trenton Doyle Hancock, Janaki Lennie, George Smith and Bert Samples, the collection is found in public spaces at each of the four main campus buildings. 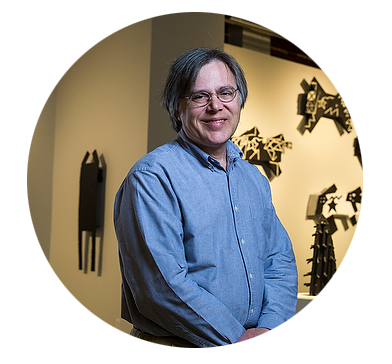 Mark Cervenka, associate professor of art. Professor Mark Cervenka has held a joint teaching and staff position since coming to The University of Houston-Downtown in 2000. His training includes a B.A. in English in 1983 and B.F.A. in Art in 1985 both from the University of Texas at Austin. He holds an M.F.A. from Claremont Graduate University in Claremont, California, received in 1987. Cervenka’s early art focused on sculpture and installation with works included in the 1989 exhibition Dialogue Prague/Los Angeles in Prague, Czechoslovakia, the first American work to be shown in the then Soviet bloc country since the 1960s. His work experience includes seven years managing the gallery at First Street Gallery Art Center in Claremont, California, a grand experience exhibiting the art of developmentally disabled artists. His work at the O’Kane Gallery as Director has been his focus for the past nine years. Curated exhibitions include American Civil War Field Notes: Sketches From Cairo to Columbia, 2008, Audrey Buller:A Magic Realist in Retrospect, 2007, Drawing the Line: The Emergence of Editorial Cartoons by African American Artists in the Indianapolis Freeman and The Richmond Planet, 2005. In addition to bringing local and national contemporary art to the gallery, Cervenka has worked with other curators to bring exhibitions including Chicano Visions: American Painters on the Verge, Paul Cadmus: Human in Form, Frank Reaugh: The Far Distance, and an exhibit of the drawings of outsider artist Bill Traylor. Cervenka’s own art since the early 1990s has focused on painting in traditional figural styles. He regularly teaches painting and figure drawing at UHD.