The El Paso-born Luis Jiménez lived and worked in the Southwest region of the United States, creating pieces that reflect his Latino and borderland heritage. His large-scale work was typically constructed from painted fiberglass and revolved around traditional themes and figures that he depicted in a realistic style. Jiménez got his start helping his father in his sign shop. Being around fiberglass, industrial materials, and equipment used to create colorful works of custom signage, introduced Jiménez to many of the materials he later used in his art production. The support of his family was the last piece Jiménez needed to pursue an art career. Often traveling to Mexico, Jiménez’s family would visit museums as well as the work of the Mexican muralists, showing their great appreciation for art. To further advance his knowledge of art, Jiménez enrolled at the University of Texas in Austin receiving his BFA in 1964. His time in Austin gave the artist an eye-opening experience to the world of art and led him to travel to New York to further his artistic career. Over time Jiménez became a world-renowned figure in the art world and one of the leading Hispanic artists of his generation.

Fiesta Jarabe is from an edition of five and features a couple dancing to a “Jarabe Tapatío”, or the traditional Mexican hat dance. Decked out in traditional folkloric attire, the working class dancers that Jiménez celebrates through their larger than life scale celebrate sensuality and make a pointed statement about fate, oppression, and inevitability. Known mainly for his ambitiously scaled sculptures, he also created drawings, lithographs, and paintings that can be found in multiple collections across the United States, including at the Museum of Modern Art, the Metropolitan Museum of Art, and the Art Institute of Chicago. Until his untimely death in 2006, Jiménez taught sculpture, public art, and life drawing at the University of Houston every spring. His connection with Houston gained him much local respect and his first public art piece, Vaquero (1980) can be seen at Moody Park in the Near Northside neighborhood of Houston.

University of Houston
Corner of Wheeler and Cullen 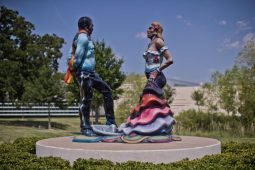