In the Spring of 2022, Public Art UHS is working with Turner-prize winning artist Oscar Murillo (Colombian, b. 1986) and his studio to realize the Houston iteration of his landmark participatory project Frequencies. Frequencies is a long-term collaboration between Murillo, political scientist Clara Dublanc, and students from schools in 35 countries around the world. Launched in 2013 at the village of La Paila, Colombia where Murillo spent his childhood years, the project sends pieces of raw canvas to schools around the globe with the sole requirement that they be affixed to desks for a period of six months. Students are invited to freely draw, write, and doodle on them during their normal school day. The canvases, with their resulting accumulation of intentional and unintentional marks, are then returned to form part of the Frequencies archive, which currently holds over 40,000 examples from over 350 schools worldwide. More than 100,000 school children have participated in the project in the nine years since its establishment. 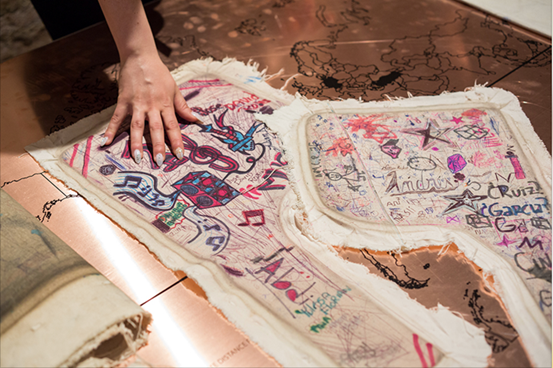 Frequencies on view at the 56th Venice Biennale

Public Art’s school partners include Stephen F. Austin Senior High School and the Baylor College of Medicine Academy at Ryan Middle School, located near the University of Houston in Greater Eastwood and the historic Third Ward, respectively. In keeping with Public Art’s hallmark approach to collaborative learning, UH School of Art students will be on hand at participating schools to engage with their students during, and beyond, installation.

All images courtesy the artist and Frequencies Institute, London

Oscar Murillo’s practice is closely connected to a notion of community stemming from his cross-cultural ties to diverse cities and places in which he travels and works, and Colombia, where he was born in 1986. He addresses the conditions of display in the contemporary art world by engaging with a series of opposites—including work and play, production and consumption, and originality and appropriation. Murillo is widely recognized for his large-scale paintings that imply action, performance, and chaos, but are in fact methodically composed of rough-hewn, stitched canvases, which often incorporate fragments of text as well as studio debris such as dirt and dust. His works and projects have been the subject of solo exhibitions at prominent institutions worldwide. Murillo was one of four artists awarded the prestigious Turner Prize in 2019. He has exhibited Frequencies at the 56th Venice Biennale: All the World’s Futures (2015), at the 2nd Hangzhou Triennial of Fiber Art in China (2016), and at the 3rd Aichi Triennial, Homo Faber: A Rainbow Caravan in Japan (2016). In 2017, it was exhibited as part of the artist’s Capsule 07 exhibition at Haus der Kunst in Munich and as part of the group shows A Poet*hical Wager in MOCA Cleveland and Fragile State at the Pinchuk Arts Centre in Kiev. In 2019, Frequencies had a dedicated exhibition at Yorkshire Sculpture Park, UK, and, in 2021, Murillo showed the project at the Cardinal Pole Catholic School in London, the school he attended following his family’s emigration to England.

Learn more about the artist.

Learn more about the Frequencies Project and sign up for the newsletter. 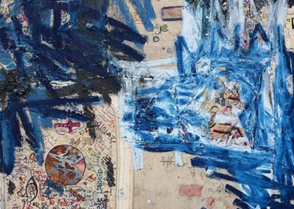 Learn more about the 2021 exhibition of the Frequencies Project at Cardinal Pole Catholic School in London, the school that Oscar Murillo attended between the ages of 11 and 18 before enrolling in art school. Watch five short videos spotlighting several of the people who selected the works on display, download a toolkit for the exhibition, listen in on a conversation between the artist and James Lingwood, co-Director of Artangel (London) between 1991 and 2021, and much more.