Receiver of the MacArthur Foundation award John Scott created Prayer Meeting as an evocation of the African American experience in the South. The rhythmic pattern of the fan is based on the paper or bamboo church fan commonly found in Southern churches while the reflective surfaces serve as reminders of the signals used in early human communication. Images of African masks and the shovel motif help evoke more imagery of African culture. Scott received a grant to study sculpture under the internationally renowned George Rickey and received two honorary doctoral degrees: one from Michigan State University, his alma mater, and another from Tulane University in New Orleans. Inspired by different art forms in African American culture such as music and dance, Scott helped modern sculpture become a part of the African American art community. As New Orleans’ most nationally renowned and respected artist, he laid a foundation for future African American artists. He was the youngest and first African American artist to be a part of the cooperatively run Orleans Gallery in the 1960s and often went by the appellative “Mr. New Orleans.” Scott was also one of the first African American artist to be embraced by the predominantly white art mainstream, paving the way for many other African Americans in the art world. 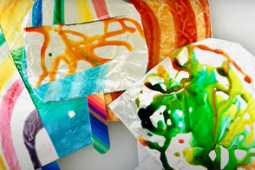 Create your own prayer fans inspired by Prayer Meeting. Watch the video for instructions. 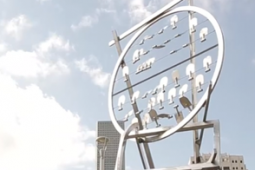 Prayer Meeting (1997) by the late artist and activist John T. Scott, was inspired by the broad African American experience of the South. The unique fusion of African, Caribbean and Creole cultures in New Orleans, where Scott was born, provided a fecund framework for his work. 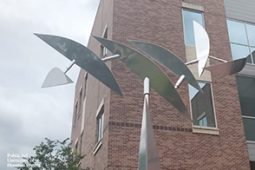