Pablo Serrano’s monumental bronze sculpture Spiritus Mundi of 1976 takes its name from the Latin concept for humanity’s spiritual source, which W. B. Yeats famously invoked in The Second Coming of 1919. The title, given by Alfred Neumann—the founding chancellor of the University of Houston-Clear Lake—following its installation on campus on April 12, 1977, was particularly fitting to one of Serrano’s most ambitious public art commissions ever. Throughout his long career, the artist had toggled between an understanding of “reality as conflict” and a deeply humanistic stance. In 1965, Serrano arrived at a breakthrough: “man, seen from without, from only his physical and material self, has little to say to us.”

The realization that man is nothing unless he opens his door led to Unidades-yuntas (Oneness, 1966-77), a series that allowed him to harmonize the main antitheses at the core of his production. At stake were forms that could be “opened, revealing the ideal, luminous interior space, or they could be closed, locking up that space.” The title Unidades-yuntas includes the Spanish word “yunta,” meaning a pair of oxen that ploughs as a team, bound together with a yoke. Fittingly, they consist of pairs of complementary rounded shapes that are either separated from one another, as in the work at Clear Lake, or perfectly coupled as parts of a whole.

Like all works from the series, Spiritus Mundi has outer surfaces that are coarse and rough, whereas its interior finishes are luminous, polished bronze. Imprints of Serrano’s hands, personal objects, and tools are commonly found throughout the series—a nod to the artist as the creator as well as to Spain’s rich legacy of cave painting. In 2019, Spiritus Mundi underwent substantial and transformative conservation. Years of being in proximity to coastal waters and accumulations of calcium salt deposits left the surface to oxidize. The surfaces had been scratched and marked over time as well. An aircraft grade stripper was used to remove the existing lacquer to expose the raw material allowing for sanding with 800 and 1000 grit paper first then 2000 and 3000 paper to on the smooth bronze surfaces. The interior of the forms was vented and inspected as well.  The entire sculpture  was then washed and treated with a sulfuric acid wash to remove the chloride salts and deposits followed by a sulphurated potash patina to restore the original nearly black patina on the textured surfaces. A cupric nitrate solution followed immediately with an ammonium chromate solution which were applied to a near 280-300 degree warmed surface to produce an almost black, dark brown copper chromite with better results. Orbital sanders were used again on the smooth surfaces with 6000 grit paper to restore the original polished look. Then the surface was polished with a waxing compound. Three coats lacquer was then applied resulting in a mirrored finish. Wax was applied to the textured surfaces as well with a final buffing all over. 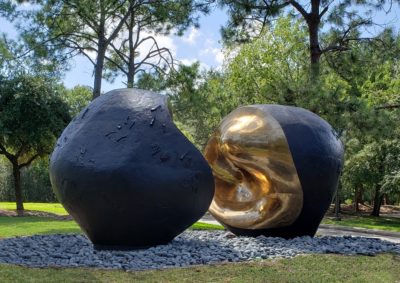 Images of Spiritus Mundi before and during conservation