Bringing Elsewhere Home: Troika, the Spirit and the Sculptural Imagination

For over a century, a bronze statue stood firmly atop a granite pedestal in downtown Houston’s Sam Houston Park. It was called the Spirit of the Confederacy, erected in 1908 by the United Daughters of the Confederacy and sculpted by Louis Amateis. The Spirit was a winged figure of monumental size; your eyes had to gaze upward to see him fully, or else you’d need to stand back. He was toned and athletic, with a sharp jaw, high cheeks, a strong chin, a handsome nose. He held a sword and a palm branch, and stood arms crossed in contrapposto. He gazed straight ahead, a serious face, guarding the park, marking his place, poised with strength and persistence. We get the impression he will gladly endure any passing of time.

In June 2020, as George Floyd’s death continued to catalyze consciousness of anti-black violence, the Spirit of the Confederacy was removed, along with scores of Confederate era monuments throughout the United States.

Its removal responded in part to questions of what we do with our monuments to white supremacy, the ways they should be rejected. My own questions wondered what it is that makes these works what they are: violent agents of the Lost Cause mythology. How do they function, and how do they work on us? In other words, what do they do—and not just what do they say?

There’s a work I’m drawn to at my home campus of the University of Houston, titled Troika (1979) by Charles Ginnever (b. 1921). I’m wondering if it could help me think through the nature of a Confederate monument. My interest in Troika approaches it as a peculiarly queer object—I think of gender theorist Judith Butler’s ideas of becoming, of gesturing towards and embodying fantasies, which are those that exist beyond what reality may limit for itself. “Fantasy is what allows us to imagine ourselves and others otherwise; it establishes the possible in excess of the real; it points elsewhere, and when it is embodied, it brings the elsewhere home.”

There’s something about Troika that feels as though it’s perpetually engaged in the act of becoming, of pointing elsewhere. As I walk around the work, it deepens and flattens, playing with its dimensionality. It morphs into a flat parallelogram, into a parallelepiped (a 3D parallelogram, analogous to a cube as a 3D square), into two interlocking parallelograms, into a set of angles. It embodies the non-binary qualities of a mobius strip, fitting for its location behind the Science and Engineering Classrooms. An unsettled shapeshifter, Troika is a continuous gesture towards possibility.

Troika from three angles, images by the author, July 2021

In contrast, the Spirit of the Confederacy is fixed and imposing. Its stance, muscles, height, and expression declares its own strength and endurance. It points towards one fantasy: the myth of the Lost Cause, that there contained a moral basis for slavery, and that the romanticized defense of this institution was chivalrous. And so the Spirit engages in a performance of its own, bringing this elsewhere home. But because its performance is so static and insistent, the work doesn’t activate itself, nor does it invite activation by a viewer. Instead, it projects unto others. It creates a space of violence imposed by the statue, which includes the violence of delivering the false history of Lost Cause mythology as sustained by such benefactors as the Daughters of the Confederacy.

The space asserted by the Spirit feels different to Troika, which settles quietly in and within its environment. I’m struck, for example, by the negative space. The sculpture itself is just its edges, flat beams of cor-ten steel, which rusts beautifully to reveal striations of age. These edges create square windows, offering frames for different parts of the landscape, depending on where and how you choose to stand before it. With its windows comfortably sat at eye-level, Troika allows itself to be seen through, and facilitates a harmonious relationship between itself and its surroundings. It feels relational in the sense that its frames elevate the architecture, landscape, and people around it as subjects that are part of the sculpture itself, seamlessly cohering space and object as activated by passersby. To move while fixing your gaze on its window is to train a film camera to pan through a scene.

The Spirit seems less interested in relating to an audience or environment as it is interested in projecting its masculinity. Tall, strong, elevated on a pedestal, and a horizon-fixed gaze, it’s essentially inaccessible, and almost invulnerable to the point of insecurity. It wants to be seen, but not to be seen through. It resists interpretations other than the myth it insists. Meanwhile, Troika invites you to understand its plurality, and to nurture the futures it imagines. It speaks with you and not at you.

For me, the new questions that emerge from this comparison concern what we aspire for our public art. In what ways do we want to relate to our monuments, and in what ways should they engage our inner and exterior spaces? What kind of aesthetics should replace our Confederate symbology—which are more than passive gestures, but rather perpetual agents of false histories? Troika models some ways of offering richness, ways I’ve found particularly nurturing when viewed through a queer lens—ambiguity, complexity, and fluidity, a resistance to being one thing, communality.

Carlos Cruz-Diez’s Double Physichromie (2009) delivers similarly rich modes of expression, and The Art Guys’ Statue of Four Lies (2010), both at the University of Houston, offers a more explicit anti-monumentality. Their qualities feel spacious, and not repressive.

Whatever we choose to succeed the pedestals once occupied by Confederate vestiges, we have to remember one lesson that our rejection of these monuments have taught us: that our public artworks are active and effecting, and that they imagine and sustain realities, false or otherwise. As much as they are sayers, they are doers. To develop an aesthetic consciousness is to understand that our art is not neutral—that it not only has potential for deep, spiritual and material violence, but also a potential for deep healing, connection, and generation. If we are to be invested in the project of healing, then we can work to understand our public spaces as intentioned sites of imagination, and we can craft and curate the art that occupies it as works that point elsewhere, and can bring the elsewhere home. 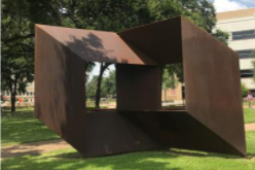 Learn more about this artwork here. 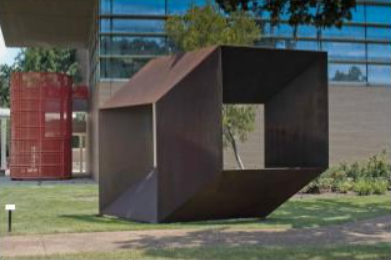 Explore Linda Howard and Charles Ginnever with Mike Guidry as he talks about perception.